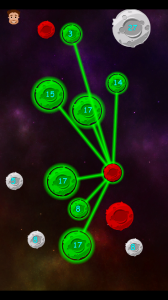 I have released Planet ControlÂ 1.3.0. The major things was a rewrite of the single player game. It had a lot of problems to be built on so I had to to something with it. It should be easier to maintain now.

It is always some bug fixes here and there, but another big thing is that I have skipped the big advertisement banner between game plays. I only have the small banner now. Hope you enjoy this new version where you can drag and drop things around to easier target the planets you controlling.